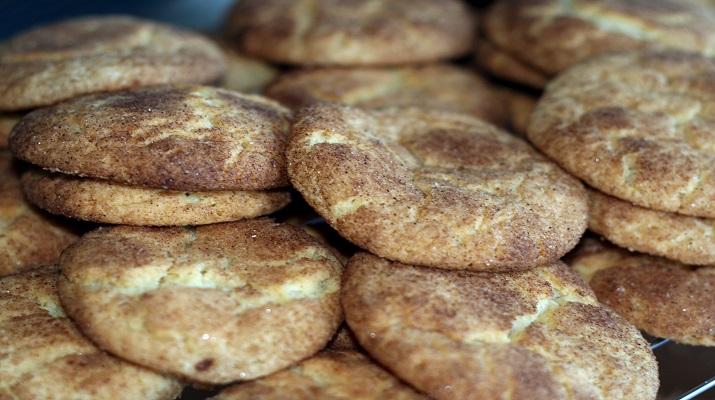 A Snickerdoodle in The Complete Collection of Biscuit Types is described as a type of biscuit made from butter or oil, sugar, flour, and rolled in cinnamon sugar. Snickerdoodles are characterized by a cracked surface and can be crisp or soft depending on the ingredients used.

Snickerdoodles are often referred to as sugar biscuits. However, there is one key ingredient that’s critical to the signature snickerdoodle taste: cream of tartar. It seems weird, the notion of using cream of tartar in a dessert, but in this case it works perfectly. It makes the biscuits chewy by preventing them from developing a sugar-crystal-induced crunch that sugar cookies have. Another difference between snickerdoodles and sugar biscuits is the topping – cinnamon instead of white sugar.

Snickerdoodles are a traditional Dutch-German biscuits that are usually covered with cinnamon and sugar and baked in the shape of a snail. Some food historians say that their fanciful name comes from the German term Schnecke Knödel which can be translated as “snail dumpling.” Others say that “snicker” comes from the Dutch word snekrad or the German word schnecke, both of which refer to a small, snail-like shape.

In that sense, the biscuits as we know them were brought to the United States by Dutch immigrants. Earlier names for cookies such as Snickerdoodles and Cry Babies originated with the New England states. Even with its early history, cookies did not become popular until about a hundred years ago.

Some historians, however think that they came from New England because they often have playful, whimsical cookie names. According to them, this biscuit was invented in the 19th century in New England of United States. There is also a series of tall tales about a hero named ‘Snickerdoodle’ from the early 1900s which may be related to the name of the cookie.

In earlier American cookbooks, cookies were given no space of their own but were listed at the end of the cake chapter.  They were called by such names as “jumbles,” “Plunkets,” and “Cry Babies.”  The names were extremely puzzling and whimsical.  New England cooks seem to have had a penchant for giving odd names to their dishes, apparently for no other reason than the fun of saying them.

He found a reference to Snickerdoodles dated 1898 on page 8 in the Boston (Mass.) Daily Globe for Jun 14, 1898. That, of course, means that the cookie was around sooner than 1898, as all etymologies reflect common usage. There is even a recipe for them submitted by M. Elizabeth Adams.

Three quarters of a cup of butter, 2 cups of sugar, 1 cup of milk, 3 cups of flour, 2 eggs, 2 teaspoons of cream of tartar, 1 teaspoon of soda. Mix; drop on a tin in spoonfuls, sprinkle with sugar and cinnamon, and bake in quick oven.

Once dough has chilled, in a small bowl, combine remaining 1/4 cup sugar and the ground cinnamon. Use a small ice-cream scoop to form balls of the dough, and roll in cinnamon sugar. Place about two inches apart on the prepared baking sheets. Bake until the cookies are set in center and begin to crack (they will not brown), about 10 minutes, rotating the baking sheets after five minutes. Transfer the sheets to a wire rack to cool about five minutes before transferring the cookies to the rack. In theory, they can be stored in an airtight container up to one week, but I say good luck with that.

Want to know more?
Ask industry experts in Biscuit People TechTalks section.
Ask a question
or
Contact us
Featured questions
See all
How to get a more light color in sugar cones? 🍦
by
Bernardo martinez
on 14.06.2022.
Blisters and hollow bottom in rotary moulded biscuits
by
Eduardo Diaz
on 20.06.2022.
How to Make a Chocolate Ice-cream sandwich biscuit?
by
Jack Zeidan
on 27.06.2022.
Featured products
See all
Tipo Butter Cookies
by
Huu Nghi Food
Mario Saunf Rusk
by
TRDP Mario
Arnott’s Tim Tam Original
by
Arnott’s Group
Featured companies
See all