A Match Made in Heaven (or rather India): Jeera Biscuits and Tea 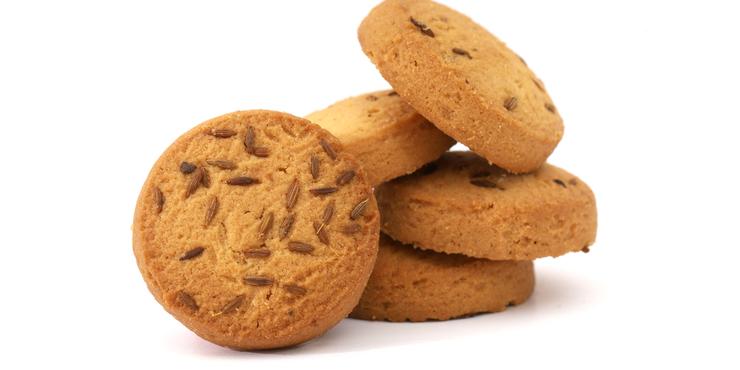 Some cookies are simple and have a mild taste, while others offer a bombastically strong taste. Some are mostly eaten alone, some with another food or beverage. Many of these different kinds are in our Complete Collection of Biscuit Types. Indian Jeera biscuits are simple biscuits that can be eaten by themselves, together with breakfast, but also dipped in tea.

On our little trip of biscuits around the world, we explore Indian Jeera biscuits, which are incredibly crispy and great to dip in tea. They’re made of simple, common biscuit ingredients: flour, powder, powdered sugar, butter, salt, and cumin seeds. Both sweet and savory, Jeera is a light snack and is easily consumed between meals or with them. But, as was mentioned, their ideal partner is delicious aromatic Indian tea.

Jeera (sometimes also zeera) is an Indian word meaning ‘cumin’, a plant whose seeds are an integral part of the Jeera biscuits hence why they’re also called ‘cumin cookies’ or rather biscuits.

What are cumin seeds and what are they used for?

Cumin seeds come from a plant Cuminum cyminum, a member of the parsley family, and are dried to make a spice – cumin. It is often used in Indian, Middle Eastern, Latin American, and North African cuisines, usually as an addition to chili, barbecue sauce, baked beans, soups, curry powder, vegetable dishes, and meat dishes. This spice can be bought in whole grain or ground form. Whole cumin is used a lot in Indian cuisine – its seeds are immersed in hot oil at the start of the cooking process so the flavor can slowly release. Ground cumin is different in that aspect because it can be added to a dish at any point in the cooking process and will still bring a warm flavor to a meal.

In India, cumin is often chewed as a digestive aid because it is said to help digestion. The spice is high in iron and various antioxidants and may improve cholesterol levels. It helps prevent diabetes and promotes weight loss, according to a study published on Science Direct.

It's a well-known fact that Indians love to drink tea. Even more so, India is one of the largest producers of tea in the entire world. But Indians often don't just drink tea by itself. They, just like many people around the globe, like to have some sort of an accompanying snack with it too. Jeera biscuits perfectly go with tea as they don’t have a strong flavor to outshine the rich tea taste and because of the cumin seeds, which are healthy as well. Indians have recognized this great combination and continue to eat Jeera with their beloved tea.

The origins of tea

Tea originated in China and is believed to have first served as a sort of medication made out of herbs and spices. Dutch merchants took some of it from China and brought it to the Western world at the beginning of the 17th century, thus introducing Europeans and Americans to the beverage. At first, only the elite could have drunk tea because it was expensive and quite rare, but Britain decided to control the tea market and expand it for larger gains. They started growing tea in India (at the time their colony) on vast plantations, which led to massive production. At the same time, Spanish and Portuguese conquistadors brought sugar cane from India to the Western world and started their own production of sugar. Someone decided to mix sugar with tea and add some milk to it, which made the beverage a lot tastier and less bitter. Because of this, tea became popular and everyone wanted to drink it. Since Britain took control of the tea market and started producing it in India, tea was popularized there and not in China. Up to this day, India is well known for its consumption and production of tea.

The dark world of tea production

The history behind tea is quite dark and troublesome. When the British grew tea on Indian plantations, they realized that growing tea is rather labor-intensive, which prompted them to employ indentured laborers. Indentured laborers were usually Indian natives who signed the working contracts in order to escape poverty. These workers signed the contracts to work for a certain period and, although the British didn’t use slaves, the workers worked under hard conditions just like they were slaves.

When the Chinese sold tea to the Western world, mostly Britain, they weren’t interested in any British products in return. This was bad for the British economy because they didn’t export to China, at least not until they came up with the idea to start selling opium. Due to it being highly addictive, the Chinese tried opium and got addicted to it, constantly purchasing the drug. The Chinese emperor decided to stop the purchase because it caused high addiction in his people but some Chinese were so keen on getting their fix that they stole 20 000 chests of opium. The British responded by attacking China and forcing them to open up ports to British trade for whatever products they were selling. They also forced China to give the island of Hong Kong to Britain.

The production of the sugar that people added to tea was by itself troublesome as well, as sugar cane was grown in America and the Caribbean due to the hard work of slaves brought from Africa.

Britain’s dominance in the tea market and the heavy taxation of tea, among other goods imposed on Americans, led to the notorious Boston Tea Party – a political protest in the city of Boston, US, when colonists dumped 342 chests of tea off British ships into the ocean. The event happened on December 16, 1773. Prior to that, the British Parliament passed the Tea Act which allowed the British to sell tea to the colonies without duties and at a much cheaper price than other tea companies. Yet they still taxed the tea when it reached colonial ports. The Crown’s unfair treatment of its American colony caused the Boston Tea Party incident which marked the start of the fight for America’s independence.

India and the tea culture

Despite all the evils of the colonization Indians experienced, they managed to enjoy the products of their own labor later on. At first, only exported, tea became a regular part of the Indian lifestyle. Indians drink tea at least two times a day and have made it an integral part of their culture. Throughout India, you’ll find roadside stalls where tea is made and sold. This is a great way to see how tea is produced and taste the real organic one. For the Natives, these places are where they often socialize, have conversations, and share the latest news. Nowadays, you also have chai cafés where you can hang out and drink tea or, as Indians call it, chai. Having followed the tradition of their colonizers, they put milk and sugar into the tea. Because tea is very popular in India it comes in many different varieties to satisfy everyone. The most popular tea in this country is the Masala chai. It’s made by boiling strong black tea with milk, water, and lots of sugar until it’s almost syrupy. The artisans of this craft tend to add different spices as well, like ginger and cardamoms, and sometimes even cinnamon and pepper. The resulting sweet and spicy liquor is drained through a sieve and served hot.

Of course, Indians can buy packaged tea in stores as well and make their own tea at home. Many do just that, according to a survey conducted by the Tea Board of India. The study revealed some interesting consumption patterns among Indian tea drinkers:

The results of the survey show that Indians keep to their tea tradition while still adding certain changes to it. Buying tea from stores shows a level of consumerism in the Indian nation while the high percentage of tea drunk with milk shows the prevalence of the tradition.

If you are interested in making your own Jeera biscuits here is a great recipe for these lovely cumin cookies.

The baking process of the biscuits is fairly simple and fast as these biscuits are a simple snack and don't need a long time to be baked. The time of preparation is around 30 minutes.

Your Jeera biscuits are all done. Serve them with a cup of hot fragrant tea and enjoy!

If you are interested in the nutritional facts and how many calories do jeera cookies contain, here they are for this recipe:

With the cumin seeds in the recipe and a small amount of sugar, Jeera biscuits are a healthy snack. For people who worry about health and, at the same time, want to eat biscuits the good news is that savory biscuits exist as a healthier option than sweet ones. No eggs in Jeera

An interesting thing about Jeera is that you don't need eggs to make them – these are completely eggless biscuits. There are some other biscuits or cookies that are made without eggs as well, so you don’t necessarily need eggs for biscuits. It is worthy to mention that usually, eggs make for a softer biscuit because they provide the dough with a certain amount of moistness. On the contrary, an eggless biscuit, such as Jeera, is usually crunchy and crispy, and not soft, precisely because of the lack of eggs in the recipe.

Since the vegan lifestyle has become popular in recent years, we also bring you a recipe for vegan Jeera cookies. With plant-based milk, no butter, and some additional ingredients to spice it all up, this recipe allows you to enjoy equally tasty, sweet and savory, but Vegan style cumin cookies.

Add oil and gently mix everything with your hands.

Break the dough into 12-14 pieces or scoop a spoonful of dough, flatten into little cakes of about 1.5″ (these cookies will not spread).

Place the unbaked cookie on a nonstick cookie sheet or Silpat. Bake for 20-30 minutes or until lightly golden.

Leave to cool on a rack and once cool, store it in an airtight container. Oh and don't forget the tea for the dunking party. One of our articles gives you tips on how to dunk the best for maximum pleasure.