September 4th, 2019
by Iain Davidson of Baker Pacific Ltd
in Our experts

The most important method of heat transfer for crackers and biscuits is radiation. Radiation penetrates the dough pieces and bakes the product, achieving the volume, structure and texture required. When baking on a heavy mesh, compound balanced weave band, conduction to the base of the product is also important. Convection, hot air impinging on the product surface, may be used in the final stages of baking to assist moisture loss and even colouring.

The flames from the ribbon burners radiate heat directly to the products and to the underside of the oven band. The radiation is proportional to the temperature and distance between the flame and the dough pieces. The temperature of a typical gas flame is 1950oC and the burner is approximately 150 mm from the products and so the radiation is very efficient. The first zones of a Direct Gas Fired oven will rapidly create volume and structure for crackers, particularly where a preheated oven band provides conduction to the base of the dough pieces. 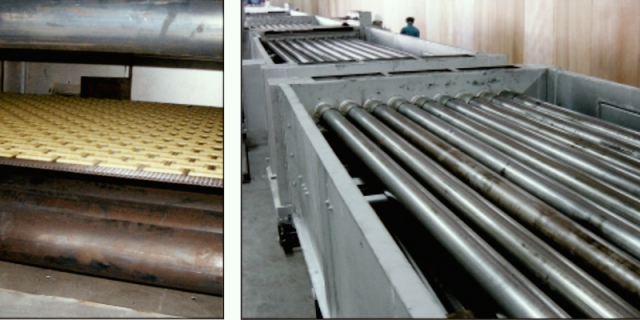 The oven has a single burner in each zone and the hot flue gas is circulated through radiant tubes above and below the oven band. Radiation is from the radiant tubes, which may be at a typical temperature of 350oC and will be at approximately 150 mm from the products. The radiant heat transfer from each tube will be around 20% of that from a ribbon gas burner in the direct gas fired oven. However due to the arrangement of the tubes along the length of the baking chamber the radiation to the products is continuous, as compared to the radiation from ribbon burners which is at several points in the oven zone, typically an average of 730 mm apart.

Extraction and movement or air in the baking chamber 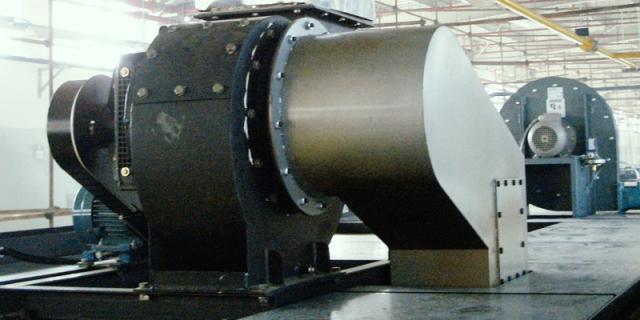 In the Indirect Radiant oven, the flue gas is continuously circulated through the radiant tubes, headers and return ducts. The flue gas does not enter the baking chamber. The increased volume from the ingress of combustion air is exhausted through the burner flue by natural convection. In the Indirect Radiant oven, each zone is temperature controlled and operates independently of subsequent zones. The moisture in the baking chamber in each zone is extracted by a separate independently controlled fan and flue. FIG 3: Indirect Radiant oven zone
The exhaust gas from the burner flue may be partially collected from each zone and used in a Heat Recovery System. The flue gas from each oven zone travels in a collection pipe along the length of the oven and is fed via a fan to the Heat recovery zone. The Heat Recovery System may heat one or two oven zones without additional burners. On independent tests the Heat Recovery Zone increased the oven efficiency by 15%.

In the Direct Gas Fired ovens, high rate radiant heat from the burners with a preheated oven band provides rapid development of the volume, structure and texture of the products, particularly for crackers. Minimum extraction in the first zones allows flue gas to flow to the subsequent oven zones.

In the Indirect Radiant oven the radiation is lower, but is continuous. The flue gas and combustion air do not enter the baking chamber. Each oven zone has independent control of temperature and extraction of moisture. The flue gas is exhausted through the burners flues by natural convection and part may be collected and used to heat the final zone(s) of the oven. This will improve the oven efficiency by approximately 15%.