May 5th, 2021
by Jim Warren of Reading Bakery Systems
in Our experts
Share this article! 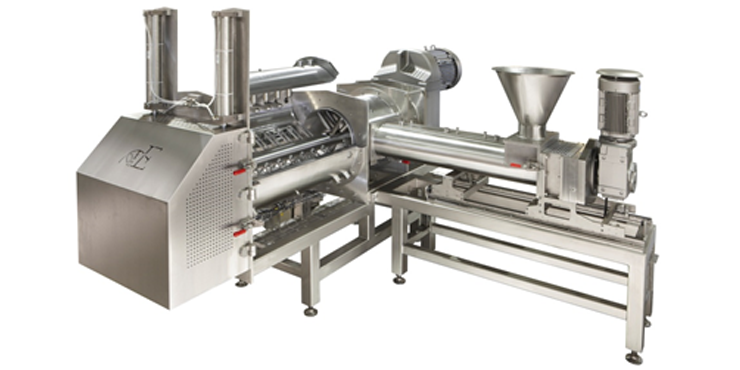 This paper describes how continuous mixing technology is being used to significantly improve the performance of continuous mesh-band ovens, which otherwise might be replaced because of age or design. While ovens deteriorate over time, or do not boast the newest technology, replacement is not the only solution. Supplying dough to the system that does not place the same demand on the oven can extend an oven’s useful life.

Continuous mixing methods provide dough with consistent parameters such as hydration, gluten development and other parameters that allow less stress and setting changes inside the oven. In turn this prolongs the useful life of the oven and produces more consistent product yield and quality.

Dough is a living entity where chemical and physical changes take place from the time water is added to the dry ingredients until the product is finished baking. Leavening, whether by yeast, baking soda or baking powder initiate these changes. Freshly prepared dough can be vastly different in its physical characteristics from the first portioned piece entering the oven to the last of that particular batch.   This strongly impacts the baking requirements needed to produce consistent products.

The ability of an oven to not only maintain consistent temperature but also quickly adjust to changes in heat demand can degrade the mechanics of the oven systems over years of use. In addition, older ovens do not offer the latest technology of servo motors, feedback loops and burner controls and therefore lack the ability to make rapid adjustments.

This can impact quality and consistency of finished dough products relating to moisture, color and texture variation as well as shelf life of finished products.

Visual results of manual changes to oven parameters can take up to 15 minutes, an unacceptable lag time. Often impatient operators make further adjustments in an attempt to speed the changes, and end up over compensating.

This ultimately leads to almost continual manual adjustments throughout the day with no consistent product output or quality.

Bakers often implement control and burner upgrades or replace ovens to meet today’s demands for product quality and consistency. These fixes resolve only the oven control but still require the oven to adjust its settings, either automatically or manually, during a production run.

In lieu of such changes that mask the core problem, a better solution is to supply more consistent dough to the oven than batch mixing is able to provide. By reducing variation in dough moisture — even the cyclical change in hydration from beginning to end of batch — the oven is no longer required to make rapid adjustments to maintain temperature in a changing internal environment.

The result is more consistent finished product properties because the oven does not fluctuate in response to the changes in the dough nor struggle to do so because of its age.

Any industrial mixing operation consists of four primary operations. The operations are

Each of these operations offers opportunities for process control and consistency.

In a batch mixing process, these four operations often are treated, designed and implemented separately. Measuring the flour is the responsibility of the bulk delivery system. Measuring other ingredients is often done by employees or systems that are designed to deliver ingredients quickly but not necessarily accurately. Mixers tend to be inflexible, with mix time and mixing tool speed as the only opportunities to adjust the process. The dough exits the mixer in a large batch that requires extended time to process.

Continuous mixing, on the other hand, integrates all four operations into a single process. This pre-blending system combines micro and minor ingredients that are then pneumatically metered to the continuous mixer. Metering systems are accurate and designed for accuracies of ±0.25% or better. Because the process is continuous, variations from flow start and flow stop are eliminated. Dough is discharged from the mixer as a continuous stream rather than one large batch every 10 to 15 minutes.

It is this integration of key operations that allows continuous mixing to supply a more constant stream of dough to the oven. But the question remains, will this more consistent dough allow the oven to perform better?

Dough consistency and baking quality are integrally linked. Consistent dough with constant moisture can be baked on almost any oven, while dough with varying moisture content can be difficult to manufacture on even the most reliable system. Ovens attempt to maintain constant temperature at their predetermined set points. The moisture removed from dough as it bakes is the primary driver of energy required, so an oven is in a perpetual state of reaction. Ingredient metering and feeding is the last step prior to material entering the first stage of mixing.

To determine how continuously mixed dough impacts oven performance, a practical test was developed. A test site was identified where the same oven could be supplied with either continuous or batch mixed dough. The two mixing systems needed to have the ability to produce dough at the same rates, and for a period of time that would allow the oven parameters to stabilize.  It was agreed that production runs of at least three hours without interruption to the process would meet these goals for the test. Figure 1: A gas flow meter was used to measure the gas demand on an oven baking crackers. Four hours of data was recorded while the oven was supplied with batched dough and depicted above in red. Data supplied during a similar time period for continuously mixed dough supplied to the same oven is depicted in blue.

A site was located during a recent continuous mixing installation. Because of increased production requirements, a continuous mixing system was being installed. During commissioning, the batch mixers, which had supplied the line in the past, were still available for use. This allowed the commissioning team to alternate between batch and continuously mixed dough as needed for the study. 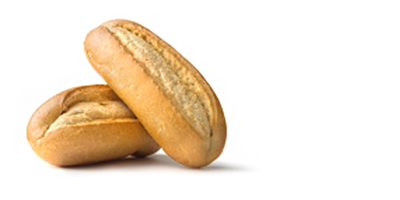 The oven to be studied was a circa 1950’s oven that was 1.0 m (39 in.) wide and 90 m (295 ft) long.  The product was a sheeted snack product produced at a rate above 2,200 kg (4,850 lb) per hour.  Comparing the alternate dough mixing methods involved recording gas consumption during periods when the oven temperature had stabilized after dough was introduced. The gas flow would be recorded every 10 minutes and gas flow during the last 10 minutes would be calculated and converted to an hourly rate. A stable gas flow would indicate the process was under control with minimal intervention by the oven controls. A fluctuating gas flow would indicate that dough moisture variation was causing a variation in energy input from the oven. All other factors such as production rate, bakery conditions, sheeting equipment and plant operators remained constant. The following graph shows the results of four hours of trials. 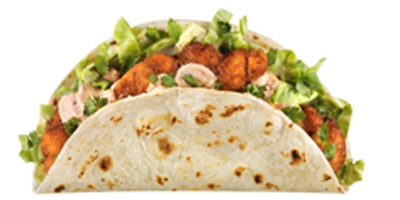 Gas drawn by the oven was done so in a more consistent manner when continuously mixed dough was supplied to the oven. When product supplied to the oven is inconsistent, modern ovens can sometimes make rapid, automated, adjustments to the gas flow to correct dough inconsistencies. This helps minimize large fluctuation in gas draw as seen in Figure 1.

However, older ovens do not have the ability to make these rapid adjustments, and they sometimes add to the problem by making adjustments in a strictly reactionary manner, which happens too late resulting in over compensation at both ends of the temperature spectrum. The process is no longer in-control.

While product quality wasn’t physically measured as part of the reported study, it was visually observed that product texture, moisture and color were more consistent when continuously mixed dough was supplied to the oven.

Science and Innovation on Center 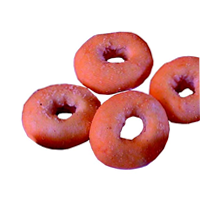 The recently-opened Reading Bakery Systems (RBS) Science and Innovation Center is a modern test facility where bakers can develop new products, test machinery and processes, and apply the latest innovations in baking and mixing to their own mixing and baking operations.

This 30,000-sq-ft Science & Innovation Center is fully equipped and capable of producing a wide assortment of baked snacks including crackers, biscuits, pretzels, bread snacks and other food products. This licensed food processing R&D facility can be used to demonstrate new processes, validate formulations and test ingredient changes. They can also test new machinery and processing techniques; research innovations in mixing, forming, baking and drying to maximize profitability; and produce samples for testing.

Additionally, the center includes a quality control lab with analytical equipment and private customer conferencing areas. Reading Thermal is also located in the Innovation Center. This division of RBS manufactures and supports the SCORPION® Data Logging Measurement System. Customers using the facility have access to Scorpion to measure and record conditions in the processing oven. 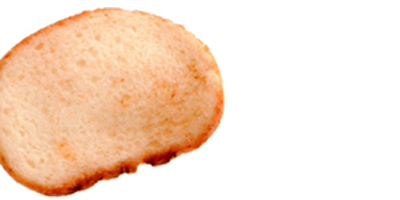 The center is located near the RBS manufacturing plant allowing machinery modifications to be made prior to or during customer trials. Custom equipment and die design assistance are also available on-site from the engineering department. It is a recognized production facility, FDA inspected, and it complies with food plant regulations allowing the production of test market quantities. A full complement of mixing systems including continuous, horizontal batch, vertical and high-speed, high-shear are available. Gravimetric dry feeders and mass flow liquid feed systems deliver ingredients accurately to the mixers, and a bulk delivery system is incorporated so customers feel they are on the production floor. A variety of sheeting, laminating as well as extrusion and co-extrusion machinery can also be used.

The center uses a 24-in.-wide, 32-ft-long oven capable of baking a wide range of products from pretzels and bread snacks to pecan pies and biscuits. Product can then be transferred into a 16-ft-long, 24-in.-wide forced convection dryer.

A baked process in control will include an oven that can maintain a constant energy input with little adjustment to gas flow. When product supplied to the oven is inconsistent, modern ovens can sometimes make rapid, automated, adjustments to the gas flow to correct dough inconsistencies.

Older ovens do not have the ability to make these adjustments, and they sometimes add to the problem by making adjustments in a strictly reactionary manner. The process is no longer in-control.  However, consistent dough from continuous mixers eases the burden of the older oven from having to constantly make corrections.

This allows older ovens to make more consistent product. Data has been presented to support this position.

While continuous mixing can improve the performance of older ovens, the best product will be made when a continuous mixer is used in conjunction with today’s advanced oven designs.

Leading image: The heart of the continuous mixer includes the blending (right) and the final mixing and discharge