Arrowroot has a long history of being used for many different applications, but in recent years it's mostly used as a healthier alternative to cornstarch, and in The Complete Collection of Biscuit Types it's most recognizable in its powdered form. When it comes to food, its application becomes more prominent in baking goods every day.

Bit of trivia before we start, arrowroot earned its name because the Aruac Indians of South America believed it was the answer to an encounter with a poison-tipped arrow. Other theory is that the common name is a misspelling of the name given to the root used extensively by the Aruac people, “Aru-root.”

Arrowroot has been around for thousands of years, 7000 years to be more specific. It is gluten free and a valuable ingredient in gluten free baked products, infant foods and as a gluten free thickening agent in sauces. However, ensure that you check the packaging. Commercially sold arrowroot biscuits may have wheat flour added to it, thus making it a gluten laden product. Arrowroot is very low in calories, a hundred fresh roots provide only 65 calories, less than that of one single potato.

Health benefits come from the fact that arrowroot is rich in several B vitamins including thiamine, niacin, pyridoxine and in minerals including iron. It can be used in cookies and crackers as a substitute for part of the flour, and you can find “arrowroot biscuits” in stores that are often said to sooth the stomach. Even its manufacturing is more natural than manufacturing of corn-starch.

The use of arrowroot in baking is not new because the British and early Americans made cookies with it long before its current popularity. 19th century cookie-type health products often contained arrowroot and Graham's flour (whole wheat). They were not generally marketed in fancy shapes.

Flour made from arrowroot starch is the perfect alternative for wheat flour when making baked goods. Its great advantage over cornflour is that it’s completely tasteless and it gives a clear finish.

To some people, arrowroot biscuits seem plain and/or too crispy for their taste, but there's something about them that makes you want another one, and another one. Don’t forget you can always have it with butter or jam, which makes it more moist and sweet. Have you tried baked goods made with arrowroot? What are your thoughts?

Share it!
Want to know more?
Ask industry experts in Biscuit People TechTalks section.
Ask a question
or
Contact us
Featured questions
See all
Butter Biscuits
by
Andy Wheildon
on 23.10.2020.
shelf life test.
by
Said Qumsieh
on 12.10.2020.
First time doing crackers I have some problems
by
Diana Krebs
on 07.10.2020. 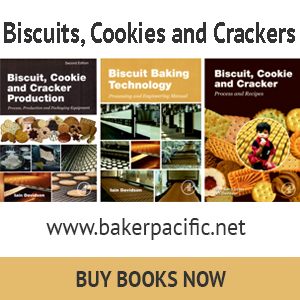 Featured products
See all
Vanilla wreath
by
Mols Organic
Cookies & Dreams Cocoa
by
Lion
Bread Rings with Corn
by
Fedon S.A.
Paterson’s Shortbread Fingers
by
Paterson Arran ltd.
Premium crackers: Sea salt & pepper
by
Consolidated Biscuit Co. Ltd.
Featured companies
See all
Consolidated Biscuit Co. Ltd.
Malta
Smart Organic
Bulgaria
Mols Organic
Denmark
Dream of Sweden Swedish Cookies
Sweden
Read more from Biscuit types
Read all
The Complete Collection of Biscuit Types
in
Biscuit types
Collection of all biscuit type articles. Use it as a quick reference guide for your biscuits and different biscuit types research.
Italian Cantuccini Biscuits Perfectly Match With Wine
in
Biscuit types
They are twice-baked, oblong-shaped, dry, crunchy, and may be dipped in a drink, traditionally Vin Santo.
6 Reasons why Arrowroot is Good for You and Your Diet
in
Biscuit types
The arrowroot is a starch obtained from the rhizomes of several tropical plants and is well-known for its numerous health benefits.
Looks like you don’t have a subscription to do that. Want to upgrade?
Upgrade subscription