July 12th, 2021
by Jos Vast of Bakery Academy
in Our experts
Share this article! 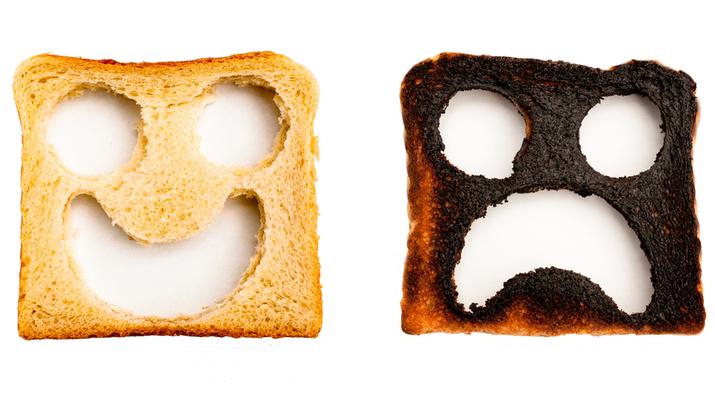 Acrylamide is a compound that can be created during the baking process of in particular grain and potato based products. The discovery in 2002 that some cooked foods contain Acrylamide attracted significant attention to its possible biological effects.[i]

Since 2005 Acrylamide is under investigation by EFSA and considered to be carcinogenic and mutagene. Acrylamide can be a result of the Maillard reaction process, or first stage of browning. The Maillard reaction is a combination of proteins and reducing sugars, that are developing flavour and colour simultaneously at the stage of around 120°C. The amino acid Aspargine is the responsible part of the proteins for the formation of Acrylamide.

As Acrylamide is assumed to be carcinogenic although there are some epidemiological studies suggest that it is unlikely that dietary Acrylamide consumption increases people's risk of developing cancer. This despite it being a probable carcinogen according to IARC, NTP, and the EPA[ii], we will continue to assume it is carginogenic. From 2011 onwards, all member countries in EU are recommended to do investigations on the level of Acrylamide present and in 2015 a Risk Assessment was done by the EU/ EFSA and bakeries are forced to make an effort for reducing Acrylamide. Reference values per product and product categories are being used to estimate if effort has to be taken by the manufacturer: it is effecting all biscuits, crackers and cookies. In certain cases also cakes and breads. As a helpful guideline a toolbox was created, called CIAA Acrylamide toolbox. Several options were proposed in this toolbox to investigate and try in relation to formulation and process adaptation. Of these options some or more easier to adapt and implement than others. Suggestion for biscuits, crackers, wafers crisp bread and gingerbread are[iii] in its latest version:

On a more experimental side they recommend to investigate:

The implementation of these recommendation are in some respect reasonable to adapt: test and analyse to certify if they would work in your situation. Past experiences show that not all recommendations are applicable in every situation: in certain cracker products darker coloured products actually contained less Acrylamide than the lighter version from the same production run[iv]. On the other hand removing whole wheat or changing the baking profile of your products might directly interfere with your finished product (desired) quality or the products economics. We will therefore cover potential solutions that have scientifically proven results in specific cases and might be applicable in either your current or your future development project. Theoretically it should be possible to select for certain products where no or low fermentation times are being used to select species with lower Aspargine as a precursor for creating Acrylamide, this is something to discuss with you flour supplier. In order to maintain the same quality throughout a year it is often challenging to impossible to organising the supply chain as such. Flours with low amylase activity (therefore a high falling number or Hagberg number) are reported to assist in lowering the formation of Acrylamide[v]. In rotary moulded biscuits and shortbread cookies a high falling number is not important for obtaining the right texture. It might result in slightly less colour, but this can be compensated (or even be acceptable by the consumers).

The idea of having less Aspargine (Asn) available as amino acid, can be done by diluting wheat for example by replacing it by a source with less Asn or proteins at all: therefore using starch or rice or mais/ corn (rye and oats have higher amount of Asn compared to wheat)[vi] in order to dilute the proteins. Research by Kolek et al.[vii] and Clayes  et al.[viii], has shown that when other Amino Acids are introduced a reduction of Acrylamide can happen. Glycine and Cysteine are reported to be the most effective ones, in the formulation or as a spray on top of the product, just before baking. If possible one could sometimes consider to use a very low dosage of cysteine in the dough: 0.005% was reported to give up to 50% Acrylamide reduction[ix] [x].

The use of a calciumbased salt (such as calciumchloride or calcium based leavening agents) in your bakery formulations seems promising as well, however one must be careful with the addition in relation to flavour deviations.[xi] The most effective result is reported to be reducing the reducing sugar content in combination with adding  a calcium carbonate (about 1% of total formulation).

Ammonium Bicarbonate results in many cases (even in some sponge disk (thus high moisture)) in an increase of Acrylamide. It is therefore recommended to replace Ammonium Bicarbonate by a combination of Sodium Bicarbonate and a fast reacting leavening salt, such as MonoCalciumPhosphate or SAPP40; there are some commercial tailored solutions for this at the market as well. The products will change slightly due to this, if however it changes the product too much, it can be argueable to use calcium salts, potentially in combination with the enzyme Asparginase.

For some traditional products and in case of breakdown of production lines, doughs are allowed (or forced into ) ‘resting’ time: time to age, not intended for fermentation. The reason for breakdown is obvious, in traditional recipes it can have to do with better dissolving of ingredients in the continuous phase of the dough (i.e. large sugar cystals to dissolve/ disappear). When not an enzyme is being used an increase of Acrylamide formed of around 35% in 3 hours time has been measured[xii].

When using yeast in crackertype formulations, the usage of specific yeast strains that contains a higher amount of the enzyme asparginase can be considered without adapting your processing conditions severely. As alternative to a yeast the enzyme asparginase can be used, but when using an enzyme it is important to understand that an enzyme depends on several factors:

It is therefore good to understand that the enzyme Asparginase is designed nowadays for 2 different pH working environments, where in the past a lower pH showed counterproductive for the activity of the enzyme. If the pH of the dough was reduced by 1 point without an enzyme a potential reduction of around 17% exists[xiii], with an enzyme lowering pH can prove to be counterproductive. Allowing the enzyme to be active means in many cases time, and if that is not feasible: increase the dosage. As however the enzyme is quite expensive many manufacturers see it as a burden. If used wisely it was stated that when a dosage of 1000 U/kg (enzyme units per kg)[xiv] on the dough was used the following results can be obtained:

In many manufacturing sites a 30 minutes resting time might be feasible, otherwise a solution with working with return dough could work (e.g. if working with a sheet/cut or laminate/cut type of process). A way around this could be to create one or two doughs where the enzyme gets his incubation time, where this is then used as a ‘mother dough’ in a x% in the next doughs. This will allow you to control better/ increase the enzyme activity and therefore lower the ACRYLAMIDE levels with a reasonable dosage of the enzyme. From a processing point of view the way products are baked are vital, considered from a product- as well an Acrylamide perspective. In this relationship we see that there are some options to choose in order to reduce Acrylamide, however some might only seem an option when you are able to invest into a fully new oven or new line. In order to be as complete as possible we will try to cover them as much as possible. When looking at different oven systems we see that radiation type ovens are less prone to form Acrylamide compared to convection or impingement based ovens, this has to be checked however on a case by case base. As mentioned before a longer (40%!) baking time with lower temperatures (17%) could lower close to 30% the formation of Acrylamide [xv], but seems hardly to be economically feasible. Speeding up the baking process in combination with falling oven temperatures and adding an Infrared section behind the oven is reported to achieve up 60% Acrylamide reduction[xvi]. This seems so be as efficient as the use of an enzyme with an incubation time of 45 minutes, without losing output and potentially even an increase in output of the production line.  A combination of techniques can therefore be even more promising, where new baking techniques are being combined with for example an enzyme or a calciumbased salt.

Adding steam in the last section oven was reported to reduce Acrylamide formation in breads[xvii], it might therefore have potential in crackers and biscuits as well as they use higher temperatures as well. The general idea is that the moisture reduces the Maillard reaction (~120°) and after evaporation of the steam instantly the temperature range is that of Caramellisation (~160°). In breads also spraying a solution of Glycine[xviii] was reported to reduce Acrylamide levels and could therefore hold potential for other products.

It is smart to firstly understand how much reduction is required to comply with (inter)national guidelines and potentially company guidelines. The socalled ‘low-hanging fruits’ should always be explored first:

Removing monosaccharides (such as fructose or glucose/ dextrose) in either their crystalline form or as part of a syrup (invert, high fructose cornsyrup, glucose-fructose syrup, etc) can have a major impact of flavouring and colouring and is therefore not very logical for everyone to take. Adding an enzyme seems therefore a more logical step, however processing conditions should be considered as well as how to handle it.

Changing your (baking) process is even less obvious, but might come in convenient when looking at renewing or improving current capacities of equipment.

Discover more Insights from Our Experts or Join TechTalk Discussion.

[xiii] “Impact of additives to lower the formation of Acrylamide in a potato model system through pH reduction and other mechanisms”, Food Chemistry, Elsevier, Volume 107, Issue 1, 1 March 2008, Pages 26-31