The Processing of Flat Wafers (7/7): Cooling, Cutting and Conditioning 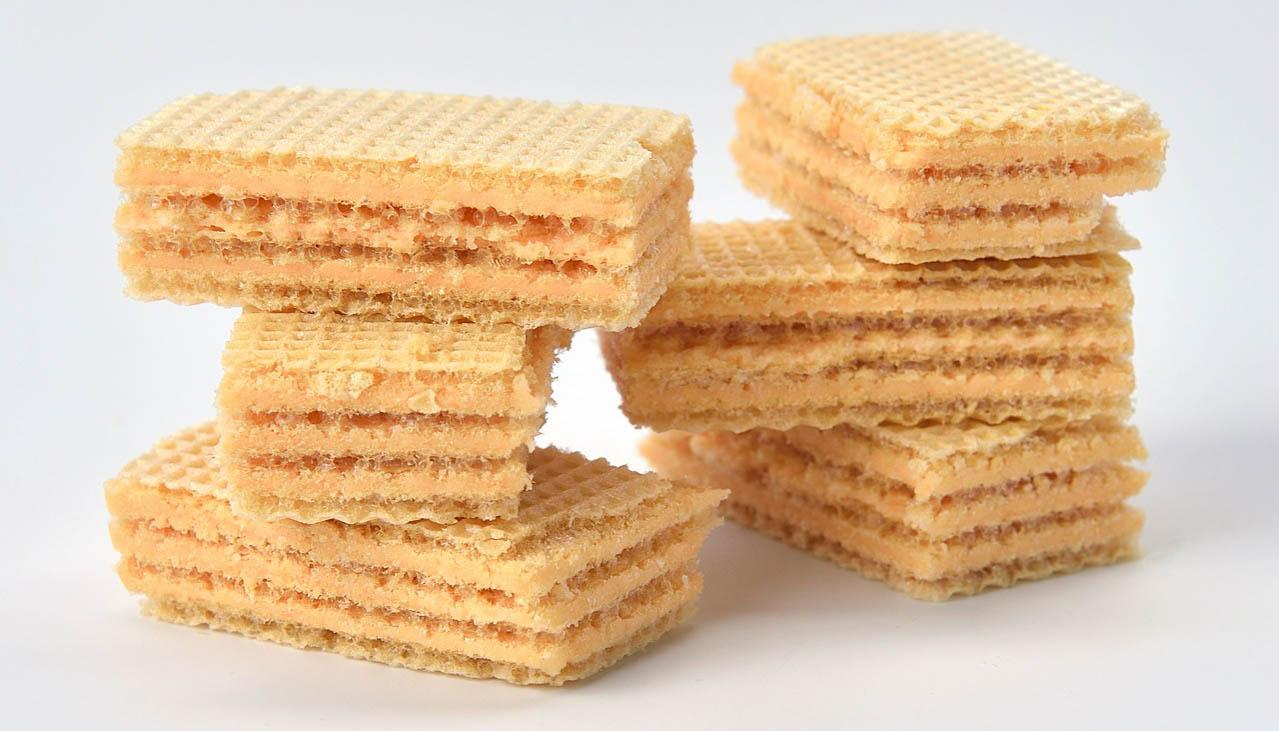 This is the final of seven installments covering all the facets of flat wafer processing, which continues discussing details regarding post-baking procedures, specifically cooling, cutting and conditioning.

The blocks of creamed wafer books are cooled in line. Cooling temperature curve or profile should be sufficient to gradually set the filling. Care should be taken to ensure that the temperature drop is not too sudden or too low as this may cause premature contraction of the filling and separation from the wafer.

This is often exaggerated if the cream is “dry” on depositing. A cooling temperature of 5-10°C (41-50°F) would be considered adequate over a period of about 10-12 minutes, with due attention being paid to the dew point in the cutting area to avoid moisture pick up once the blocks come from the tunnel.

Frequently one sees separation of the wafer sheets from the cream filling on transfer from the cooling tunnel to the cutting unit. It is usually the top sheet that bows and the tendency is to lower the tunnel temperature in the mistaken belief that the cream or filling hasn’t set. In reality often it is the reverse, the filling has set too quickly before adhesion as taken place, this is because the temperature is too low, the solution is to raise the temperature a little.

The cutting device is a simple lightweight unit that can handle several creamed books at a time, or individual books in line. The books are fed through a device which cuts them in one direction; they are then pushed at right angles through the second part of the device which cuts the sub blocks into fingers, squares, etc. as required.

Wires, blades or saws perform the cutting. Wires or blades are preferred for light colored creams as they create less cutting dust waste. Saws tend to smear the wafer edges and are not so often used these days although one may find them in some older installations or for products with caramel type fillings etc.

Where saws may still be used it would be quite common to run them counter clockwise or in reverse against the wafer for a cleaner cut with less chipping of the top sheet. The gauge or thickness of wire used can vary, but in calculating losses for piece dimensions wires are usually taken as 0.5-0.6 mm (and saws as 0.9-1.25 mm). Modern cutting units with static steel blade harps have a cutting thickness of only 0.3 mm.

The choice of whether to use wires or blades apart from the calculation of waste (as cutting dust) depends on the height or number of cream filled books being fed at any one time. Up to a height of about 40mm either can be used, above this height wires are to be preferred, as blades tend to bow resulting in curved irregular edges to wafer pieces or fingers, etc. Care should also be taken in feeding the cutting units. Over feeding results in bridging, this can cause “shock” and separation of wafer/cream layers.

Following cutting, the wafers are fanned out to packaging machine or second process. Modern installations almost always have straight through continuous production, avoiding the use of lay aside trays and double handling. If for whatever reason naked wafers to be wrapped have to be put into lay aside trays, consideration has to be given to the ambient conditions in which they are held.

It goes without saying that production areas of high temperatures and humidity can cause the wafer and cream to separate resulting in delaminating and waste.

Why the need for conditioning? Simply to get the wafer to expand before secondary processing rather than after. Wafers which are to be molded or enrobed in chocolate need in most cases to be conditioned, to avoid what is known as crazing, cracking, splitting or at worst crocodiling once the pieces have been wrapped.

This problem is caused not only by migration of existing residual moisture within the wafer itself, but also by the absorption of moisture from the atmosphere. In addition, it should be realized that moisture can penetrate a chocolate coating that is 1.0 mm thick. If any uncoated areas or “pin holes” are apparent, the problem is exaggerated. This movement of moisture causes expansion of the wafer and pressure on the coating from within resulting in the cracks.

Some compound coatings appear to be slightly “flexible” and “expand” as the wafer expands thus avoiding the need for conditioning. Care must be taken however, to avoid any such risks. At one time creamed and cut wafers were stacked in open trays to condition. This took from 2-5 days at a temperature of 20-22°C (68-72°F) and R.H. ranging from 50-70 %. The objective was to bring the wafers to a moisture content of between 4.5-5.3 % creating the expansion (hopefully without delaminating) before coating and essentially at the same time retaining a fair degree of crispness.

Most factories have been reasonably successful in conditioning in this way although it is difficult to imagine that centre wafers within a book would be fully conditioned. Some factories also attempted to condition individual wafer sheets in this way before creaming but experienced difficulties with warped sheets resulting in waste at the creaming unit. Many ingenious ideas have been tried including spraying sheets with water in line, but most without success.

For the last few years conditioning tunnels as well as to a lesser extent towers have come into their own having, as was inevitable, been developed to maintain continuous production and product flow, avoiding the inconvenience and additional expense of storage and double handling. Nevertheless, the cost of such an installation does not come cheap and a certain level of product volume has to be achieved to justify its installation.

Tunnels can be retro-fitted to existing installations and are usually located above the cream depositing and book-building units. The baked wafer sheet is automatically transferred in line from the top (for retro fitted units) or the bottom (for virgin installations) of the Arch cooler into the individual holding frame or bracket of the conditioning tunnel.

Factories with purpose built-in line conditioning units can therefore condition each individual sheet after the Arch cooler and before creaming without the problems experienced with the off-line method. The objective of conditioning is to get the wafer to take up a controlled amount of moisture. The conditions required to do this may vary from plant to plant depending on ingredients, formulation, sheet thickness etc. Conditioning units would operate in a temperature range of 35-60°C (95-140°F) with R.H. of 60-90%.

Rate of throughput would be in line with oven output, but care should be taken to avoid too rapid a conditioning time as warping is likely to result, minimum time would be about 16-20 minutes or even slightly longer, say 30 minutes in some cases would be better. Wafers not required for coating (i.e. naked wafers) would by-pass this unit, as they do not require conditioning.

In line conditioning tunnels (or towers) are now quite common and currently have been proven to be the most efficient way of producing relatively consistent and uniform moisture controlled wafer for molding or enrobing. In taking up moisture the wafer sheet will expand so it is worth remembering once again that as it leaves the baking plate it shrinks slightly, and after conditioning expands to more or less the original plate size.

As a consequence the sheet is likely to be a different size depending on if it is used for a naked (non-conditioned) or enrobed/molded (conditioned) end use. This in turn can affect the amount of trimming waste and should be taken into consideration when calculating piece size. It is worth mentioning here that one school of thought considers that distribution of moisture is more important than actual moisture uptake to the 4.5 – 5.3% level. To this end a dielectric oven has been used after baking to equilibrate moisture. This idea is not widely used or accepted as cracking will still occur if the coated product has visible pin holes or is poorly wrapped and hence takes up additional moisture.

From time to time one does come across situations where cream filled wafers are successfully enrobed using real chocolate without ill effect, other than very fine crazing, almost invisible to the naked eye and the average consumer. Only close scrutiny makes it apparent, and it is, in most instances, found to be within acceptable tolerances from a quality point of view.

In cases of this kind one usually finds that the wafer sheet thickness is greater than the average, i.e. 3.3-3.8 mm compared to 2.3-2.8 mm. As a consequence, it is thought that the more open porous structure of the body of the wafer can take up moisture more readily. This can be hours rather than days and often is within the time scale of most second process/lay aside tray operations in ambient rather than a temperature and humidity controlled environment.

Nevertheless, good manufacturing practices would suggest that the risk could be too great to assume that this would always be the case and controlled conditioning is the better option.

The conditioning tunnel or tower is linked to an “air conditioning” cabinet. Set values for temperature and humidity are determined to achieve the required environment within the tunnel or tower. Given the combination of ideal temperature, humidity and time, the uptake of moisture by the individual wafer sheets can be reasonably well maintained. The individual brackets or clamp carriers ensure that sheets are treated gently and do not warp providing that the conditions which have been well established prove to be suitable for that particular product.

The “air conditioning” cabinet makes use of water supplied from the mains. Depending on the supplier of the unit, demineralising salt is recommended and added to the reservoir to purify the water. This is to avoid the built up lime scale in both the unit and tunnel. Alternatively, the water is turned to steam via a heated coil system and then decalcified via a “filter” unit. Ultra Violet lamps are used in both systems against any microorganisms.

This can be done manually at random or preferably automatically. Equipment exists capable of weighing books in line up to 1000 g to a claimed accuracy of +/- 0.5 g. As previously mentioned, such a unit can be a worthwhile investment. 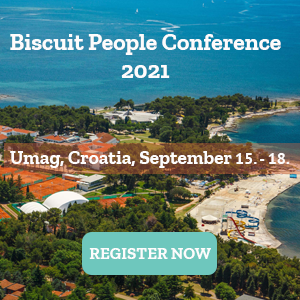 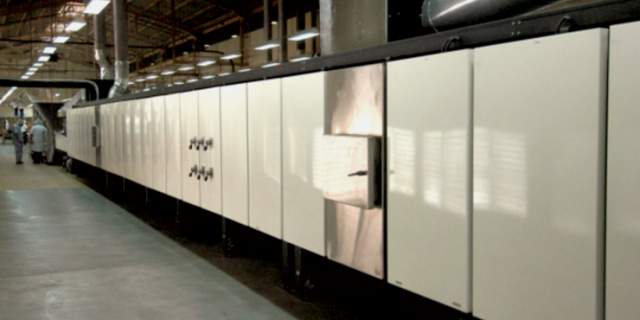 Oven Heat Recovery System (HRS)
in
Our experts
Find out how to save on costs and achieving high efficiency by using waste heat from the burner flues of an indirect fired oven. 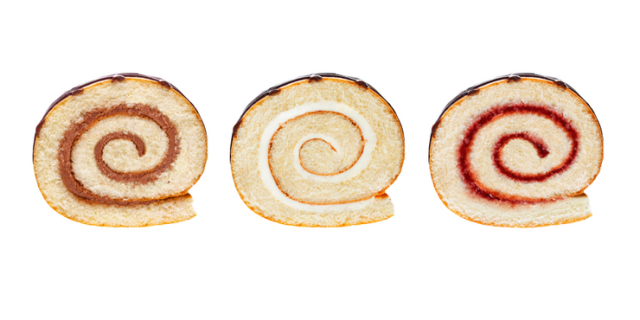 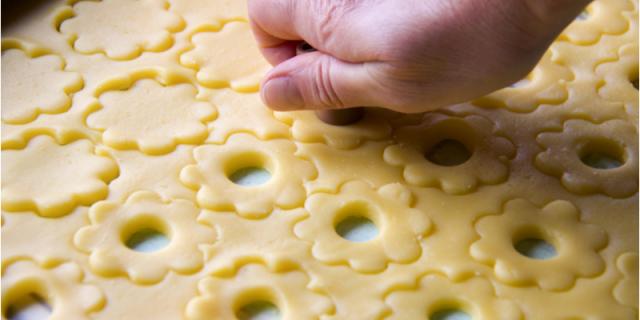 Who doesn't know biscuit?
in
Our experts
Would you like to learn something new about biscuits, cookies and their history?
Looks like you don’t have a subscription to do that. Want to upgrade?
Upgrade subscription