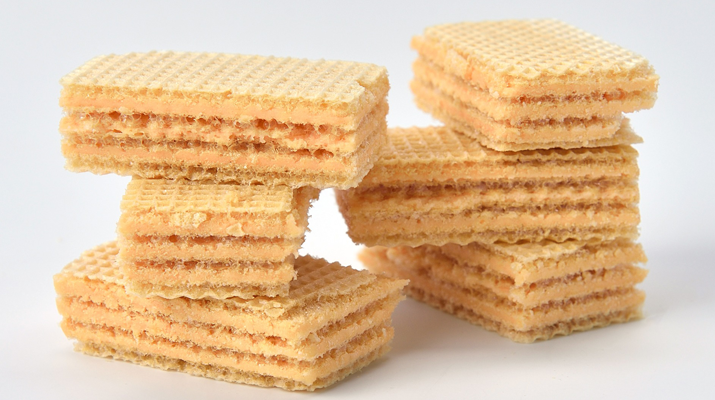 This is second of seven installments covering all the facets of flat wafer processing, which discusses details regarding the necessary pre-baking processes.

Chemical aeration
Air bubbles created during mixing are usually expelled as the batter is pumped to the plate. Combinations of ammonium bicarbonate and sodium bicarbonate are effective in replacing this. The latter effects pH and color of the sheet and is often increased within limits to reduce effects of deposit variation compared with the overall sheet color (piano keyboard effect) and to obtain good distribution across the plate.

Ideal pH of the baked sheet would be 6.8 – 7.4 with wafers for chocolate creams and coating in the range 7.0-7.4 for flavor. A good starting point with ammonium bicarbonate and sodium bicarbonate to achieve effective results is a 50:50 blend at approx. 0.60-0.65% based on flour. It is very rare to see baking acids used in wafers as given the aqueous nature of the batter a reaction would take place with sodium bicarbonate during mixing, nullifying the desired effect both during baking and on the finished product.

Mixing
A mixer capable of providing a homogenous blend of ingredients should be used. The mixer should have low shear capability to avoid gluten formation particularly with low solid batters. Some high solid batters may require high shear mixers, which seem like a contradiction, as it is almost impossible to produce such batters without gluten formation. In such cases ideally the high shear effect would tear or break down the gluten strands, however, batters of this type are quite rare mainly because of the production problems they inevitably bring about.

The batter as previously mentioned is essentially a suspension of flour (and other minor ingredients) in water. Small batches should be made up or at least batch sizes to coincide with effective utilization by the oven or ovens. Over mixing should be discourage with the potential danger of creating gluten strand formation. Depending on type of mixer used, many commercial mixing times range from 3-6 minutes with 4 minutes being about the average.

It has been said that 4 minutes should in fact be the minimum mixing time given in order to achieve good homogeneity. Nevertheless, modern mixers of the so-called turbo type can give adequate mixing in about 3 minutes. It has also been suggested, and very few would disagree that it is imperative, that very cold (15-18°C / 59-64 °F) or even chilled water be used to avoid gluten formation and stringy batters.

Various mixing methods have been employed over the years with the main objective of obtaining a good homogeneous mix, free from stringy gluten formation. Some mixing methods initially called for half the water and all the flour, others half the flour and all the water. On balance, it would seem that the all-in method achieves the objective required in the most convenient and probably the most consistent way.

The reason for adding the lecithin/fat blend after the flour is to avoid solidification or globulization of the fat in the chilled or cold water whilst at the same time coating flour particles as they are incorporated into suspension. Provided that stringy batters are avoided, this method should be ideal. In any event, the mixing method to suit the ingredients, formulation and mixing equipment should be determined in situ.

Commercial batter temperatures vary considerably from 20-35°C. It is recommended that the lower temperatures are to be preferred, to avoid gluten development that can occur with higher temperatures. Likewise, lower temperatures help to reduce or more correctly avoid the possibility of fermentation in pipe work and ringmains etc. hence a further reason for the use of cold or chilled water.

It is not usual to check batter details on every batch following mixing unless problems occur. However, using a specific recipe, which has proven to give an acceptable product, the following details can be recorded over several mixings and retained for reference as a benchmark or standard as required.

The reason for controlling the viscosity is an attempt to minimize the variation and improve efficiency so that sheet weight and thickness is standardized and maintained.

pH
It would also appear that awareness of pH is not a common parameter in wafer batters or in the baked wafer itself. Checks on various standard batters however give figures of from 6.4 – 7.0. Wafers to be chocolate molded or enrobed could benefit in terms of flavor from a slightly higher or more alkaline pH, as previously mentioned. Care has to be taken however that this is not too high as shelf life could be negatively influenced.