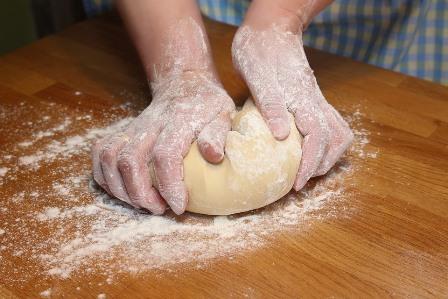 Mechanical emulsification of the fat phase, liquid phase and soluble ingredients (where desirable) will contribute to improved tolerance of the dough during processing.

MECHANICAL EMULSIFICATION OF FAT AND WATER Application of the high speed-high shear mixing process, a liquid phase of oil and water, results in a desired emulsion, which allows for optimum water to be added to the dough to achieve maximum volume and a light textured baked product.

Mechanical emulsification of the fat phase, liquid phase and soluble ingredients (where desirable) will contribute to improved tolerance of the dough during processing.

This method has been particularly effective when applied during the first stage of a continuous mixing project. I.e. incorporating and emulsifying all the liquid and soluble ingredients include the fat.

There will be in increase in product volume.

Also effective in the application and hydration of fat mimickers and substitutes in the processing of low fat biscuits.

Benefits: Increased product volume: Case Study 8%  increase  in  Rotary  Moulded  Cream  Shell  due  to  water conversion to steam during baking and a 5% reduction in shortening due to improved distribution of fat within the dough, resulting reduced pressure on rubber roll extraction for rotary moulding process. When an optimum proportion of ingredient water is added to the dough, then a period of standing time is desirable (30 – 45 minutes) after mixing to promote stability in the water adsorption of the flour.

Standing time can influence the consistency and the pH of the dough over a long duration e.g. 1 hour, plus resulting in difficulty in processing the dough, particularly in wire-cut processes.

Analyse and record the final dough temperature and density.

COMPARISON OF CONTINUOUS MIXING VERSUS BATCH MIXING, WITH A 5% REDUCTION IN FAT CONTENT FOR THE SAME PERCEIVED TEXTURE Case study: This photograph illustrates the difference in product quality between batch mixing and continuous mixing of short crust pastry.

In response to customer complaints of "seepage" of the sugar syrup making the base of the baked products soft and unsightly, I instigated that the company evaluate the potential for developing a Continuous mixing process. This was developed by using the above process of Mechanical Emulsification, followed by Twin Screw Extrusion, resulting in a major improvement in product quality.

Flour is screw fed into the dry feed port of the extruder.

Mechanical emulsification of ingredients, syrup, water, chemicals and shortening, which are metered into the continuous mixer, resulting in "one dry feed and one wet feed system".

The influence of the Mechanical Emulsification stage ensured that the crystal sugars were in solution and after continuous mixing the dough was fully homogenous.

This resulted in a 5% reduction in the pastry fat content and the improved crispness and caramelisation of the baked product.

Emulsifiers in the baking industry