Palsgaard has reached its goal of total carbon-neutral production two years early, describing the achievement as a milestone for the whole ingredients industry.

The Danish company, known as the inventor of the modern plant-based food emulsifier, has a long history of social and environmental responsibility. In 2010, it set itself the goal of completely carbon-neutral production within ten years.

It has achieved this target two years ahead of schedule, reducing its net carbon emissions from 12,029 tonnes in 2010 to zero in 2018. Over that period, it has achieved CO2 reductions totalling 56,175 tonnes – equivalent to the amount produced by 4885 European (EU) households in a year. 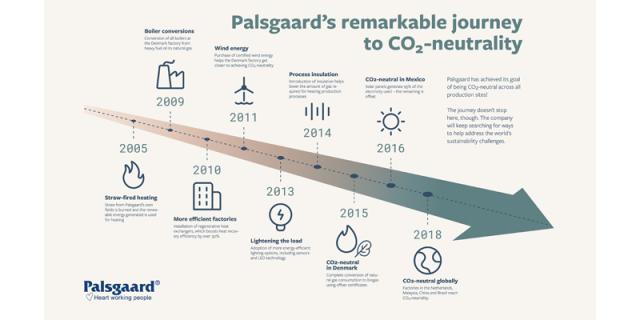 The company’s six global production sites are now all carbon-neutral, mainly through changing sources of energy. Strategies have included new heat recovery and insulation techniques, a switch from heavy fuel oil to certified biogas, and the use of renewables. At Palsgaard’s main site in Denmark, all electricity is sourced from hydro power, and indoor heating is powered by burning home-grown straw rather than oil.

The company’s Dutch factory has over 800 solar panels and has run off only renewable energy since the start of 2018. Because changing energy sources is not possible everywhere, Palsgaard has also partnered with the UN and purchases its official carbon credits to offset emissions.

Jakob Thøisen, CEO of Palsgaard said: “This is a major milestone - not just for Palsgaard but for the whole ingredients industry. The production of emulsifiers is very energy-intensive and when we decided to eliminate our carbon footprint, many thought it couldn’t be done. However, we’ve demonstrated that with ambition and innovation, sustainable ingredient production is possible. Achieving CO2-neutral status ahead of schedule has given us extra energy to continue making a difference. We hope other companies will be inspired to go on the same journey.”

Palsgaard, which is celebrating its centenary this year, is now planning a range of new green initiatives, including a new solar energy park at its headquarters in Denmark.

Anders Brix, Group CEO of the Schou Foundation, which owns Palsgaard, said: “Throughout Palsgaard’s hundred-year history, we have been dedicated to meeting challenges and climate change is undoubtedly the greatest challenge facing us now. At the moment, carbon neutrality is a rare achievement, but it will soon be the norm. Manufacturers will be forced to reduce their emissions, not just because it’s the right thing to do, but because environmentally conscious consumers demand it.”

As well as being manufactured in CO2-neutral factories, all Palsgaard’s emulsifiers are vegetable-based and sourced as sustainably as possible. Where the company uses palm oil ingredients, it relies on RSPO-certified raw materials, enabling it to offer its complete product range as MB - or SG-certified.

Share it!
Want to know more?
Ask industry experts in Biscuit People TechTalks section.
Ask a question
or
Contact us
Featured questions
See all
Hard Dough Biscuit
by
Md. Habibur Rahman
on 07.07.2020.
Fat
by
Tanmoy Basak
on 17.06.2020.
Checking Problem
by
Tanmoy Basak
on 21.03.2020.

Featured products
See all
High Speed Mixer
by
Baker Perkins Ltd
Fondant powder
by
Couplet Sugars
Whey-Pro biscuit with 20% protein
by
Arla Foods Ingredients
Moulding roller
by
Errebi Technology
Wafer Baking Oven
by
Gocmen Machine Ind. ltd. Co.
Featured companies
See all
Märtens Transportbänder GmbH
Germany
Reading Bakery Systems
United States
Procys
France
IPCO
Sweden
Read more from News
Read all
China Gives the Green Light to Whey Permeate Imports
in
News
The opening of the Chinese market to permeate exports is highly significant for the global dairy ingredient industry.
Fast and Cookies
in
News
Experience, quality, technology and research are the cardinal points of Errebi Technology, a company which has been making biscuit moulds and cutters...
Baked but Not Fried
in
News
It is clear that consumer preference for the range of healthy products must not influence taste and consistency.
Looks like you don’t have a subscription to do that. Want to upgrade?
Upgrade subscription