Enzymes as Alternative to Sodium Metabisulfite

May 7th, 2021
by Lutz Popper of SternEnzym
in Our experts
Share this article! 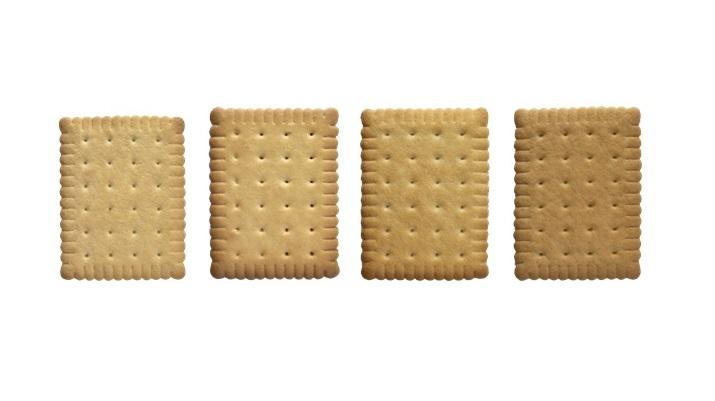 Sodium metabisulfite (SMBS) has been used successfully for many years to modify the characteristics of the gluten and hence dough in order to produce quality hard sweet biscuits and in some kinds of snack (savoury) crackers. However, in the recent past, there has been a tendency to omit this effective reducing agent in many recipes and processes. The following text summarizes considerations for the use and replacement of SMBS and gives an example how to reduce or omit this chemical in a given formula.

In the past before the establishment of SMBS, the dough for hard (semi) sweet products Marie and Petit Beurre type had to be mixed for a long time to weaken the gluten, and then laminated in order to obtain a smooth surface of the biscuits and control their shape.
Mixing times required were as long as 30 to 60 minutes or even more, depending on the formulation, type of mixer and flour quality. Pieces of dough were laminated and folded on hand brakes and rested to relieve the stress in the dough. The use of SMBS made it possible to reduce the long mixing times and avoid lamination with hand brakes. It was now possible to feed the dough directly into the sheeter of the cutting-machine. When the advantages of SMBS in the formulas became apparent, its use soon became widespread. Unfortunately, it is now often being used in excess to compensate for sub-optimal processing conditions.

However much SMBS simplifies the production and reduces costs, there are drawbacks

SMBS results in products with a distinct undesirable aftertaste, a lighter colour compared, and it causes the destruction of vitamin B1. Furthermore, some persons are sensitive to SMBS (it causes them, e.g., skin rushes and headaches), and it must be declared on the packaging. Since clean labelling has become an important issue, the elimination of sodium metabisulfite from the label should be considered. Enzymes are definitively a good solution to replace SMBS.

Applications of SMBS and the advantages of enzymes

SMBS is used in hard (semi) sweet and some snack (or savoury) crackers. Although only little amounts of water is used in their formulas, it is just sufficient for the enzymes to function.

When enzymes are used instead of SMBS, the final product will have important advantages:
•    The flavour improves because the sulphurous SMBS aftertaste is eliminated.
•    A stronger Maillard reaction improves the flavour further.
•    Browning is more intensive because of the Maillard reaction.
•    Enzymes are considered processing aids because they are completely destroyed during baking or inactive in the final food; therefore, they need not to be declared.
•    In many countries, SMBS is prohibited or limited to very low residual concentrations.
•    Export opportunities for countries with SMBS restrictions can be taken.
•    Some very well-known hard sweet products, which are often used as reference products worldwide, are made without SMBS.

The benefits that may motivate to replace SMBS with enzymes are easily demonstrated.
Preparing a small batch of a known formula using enzymes instead of SMBS immediately shows a convincing improvement in the flavour and increased colouring of the product during baking (Figure 1).

When replacing SMBS with enzymes, industrial trials should be performed in stages, increasing the level of enzymes step-wise while reducing SMBS simultaneously.
There will be small variations in the quality of the final product. When the exchange is carried out with care making the appropriate adjustments after each stage, the consumer will not note these minor differences. Figure 1:    Effect of enzymes as replacement of sodium metabisulfite.
The biscuits have been produced in small scale in the laboratory of the author, with untreated bread flour. The processing conditions were kept constant for all trials. SMBS as well as the enzymes were used at standard dosages, without optimization. Sternzym BK 5020 represents a bacterial protease with a pH optimum of 7 – 8. Sternzym BK 11070 consists of the same protease at the same concentration, supplemented with a bacterial amylase (pH optimum 6 – 7) and a slightly increase temperature stability (stable up to approx. 70 °C). SMBS as well as the enzyme improved the shape of the biscuits. The surface was smoother with SMBS, but this property can also be obtained with enzymes when optimizing process and dosage. The amylase further improved browning and spread, as compared to SMBS and protease only.

Factors affecting the action of enzymes

In particular, proteolytic enzymes are considered for replacement of SMBS, although other enzymes may have beneficial effects on processing and baked product quality. No matter what enzyme is being used, there are factors that should be taken into account, the most important being
•    availability of water (water activity),
•    enzyme concentration,
•    enzyme specificity,
•    substrate concentration,
•    temperature,
•    pH,
•    presence of inhibitors and activators,
•    agitation.

Variations in the conditions influence the speed of the reaction. During the process of the replacement of SMBS these inherent factors may have to be compensated with the appropriate choice and the quantity of enzymes in the formula. Figure 2:    Farinographs with sodium metabisulfite (SMBS) or enzyme systems at 30 °C. BK 11070: containing protease  and amylase; BK Quick: containing proteases and pentosanase.
When tested in the Farinograph, enzymes and SMBS show a decline in kneading resistance (Figure 2). The reaction of SMBS occurs much faster, but also the slower but persistent reaction of the enzymes results in a significant reduction of the mixing resistance. Nevertheless, these figures indicate already that the use of enzymes may require some modifications of the process, in particular of the resting time (longer). Alternatively, the temperature could be raised to accelerate the reaction (for instance to 40 °C instead of 30 °C).

The proteolytic enzymes act randomly on the polypeptide chain of the protein – gluten in this case – and break up the long molecule (Figure 3) into shorter peptides, whereas SMBS breaks up the disulfide bonds connecting different loops of the protein without reducing the length of the molecule. In consequence, the doughs from each reaction have somewhat different characteristics. However, this difference should not be a deterrent for the changeover from SMBS to enzymes, and an experienced dough-maker will be able to determine the optimum conditions for the application of either agent. Furthermore, enzymes – particularly combinations – offer more freedom for optimization of the process and the baked products.

Enzymes need time to act and to give the expected results, whereas the action of SMBS is a chemical reaction that runs much faster. Dough made with enzymes needs a resting time (unless uneconomically high dosages are applied); dough with SMBS can be processed almost directly. The time enzymes need varies from about 30 to 150 minutes (including mixing). The enzymes continue to work during the resting time.
The lay or resting time is often thought of as one of the main disadvantages: Because of the additional time required as compared with SMBS, more dough cars and space for them is needed. Although this is often the case, positive effects will prevail: During the resting time, other (including endogenous) enzymes will also be able to function. Protease forms amino acids, and amylase reducing sugars; with these two components, the Maillard reaction will be more intensive and in consequence, the colouring (browning) and the flavour improve considerably. Pentosanase will help the return dough from the cutting-machine to stay soft and have a texture similar to fresh dough with which it re-joins in the hopper, because water released from the pentosans compensates for the loss of water during dough processing and transportation.

A first impression is that enzymes will cause higher costs. Indeed, the cost per kg for enzymes is higher than that of SMBS. Appropriate enzyme systems for hard sweet biscuits are based on bacterial protease and from case to case on amylase (and pentosanase). During the resting time, the formation of short peptides and reducing sugars takes place, resulting in improved Maillard reaction. Therefore, it is possible to reduce the level of some cost-intensive components in the formula, which supply amino acids and reducing sugars, e.g. milk solids like whey, skimmed and full cream milk powder and reducing sugars, glucose, invert sugar and malt syrup.

Changing from SMBS to enzymes

The procedure to replace SMBS by enzymes should be kept simple. The ideal way is to make small trials in a pilot plant or laboratory to adjust the dough consistency and establish a convincing quality improvement of the final product. Once the decision for a modified procedure (enzyme dosage, recipe modifications, time and temperature adjustments) is taken, the process for the change-over in the production plant can start.
Particularly if no pilot plant is available, it is advisable to introduce the change in small steps. In order to avoid unnecessary trouble at the production scale, the replacement process should start by using e.g. 20 % of the chosen typical enzyme dosage replacing e.g. 20 % of the SMBS, then 40 % etc., accompanied by small adjustments of the resting time (let the dough-maker decide when the dough is ready) and of the oven temperature. Reduce milk solids and reducing sugars stepwise in order to compensate for differences in the colour of the product. In a relatively short time, the process can be completed. Table 1 gives an example for an iterative replacement of SMBS accompanied by an economic optimization of the formula. 1    We chose a low maximum dosage in order to improve the processing tolerance: Higher dosages cause faster change of dough properties in case of standstills.
2    Mixing time depends on type of mixer, may vary from 8 to 15 minutes
3    Resting times vary with enzyme dosage. Lower enzyme dosages require longer resting times but result in more tolerance in case of interruptions of the production process. Resting time can be reduced when mixing time is prolonged (keep energy input constant by reducing mixing speed).

Enzymes are Unbelievably Versatile and Effective