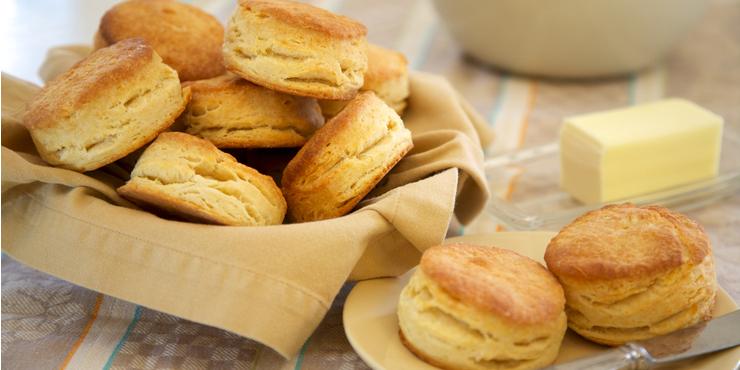 What is buttermilk? Is it made out of butter or milk or a combination of both? What are the benefits of using buttermilk in baking? Can one make butter biscuits with it? These, and many more, are the most common questions when it comes to buttermilk. Luckily for you, all the info you will ever need about buttermilk can be found right here!

Today we're taking a look at buttermilk, a type of dairy product which can be used to bake all sorts of biscuits. If you are looking for an authentic recipe for Paula Deen buttermilk biscuits, then you are in luck, as a sample recipe will be posted near the end of the article. Stick around for loads of useful information about buttermilk and its numerous benefits.

Buttermilk: What is it exactly and how do you make it?

As the name suggests, buttermilk is a fermented dairy drink that is left behind after churning butter. Buttermilk is most common in warm climates, e.g. India or southern United States (but it is not exclusive to these areas) due to milk becoming sour real quick because of the high temperatures. Buttermilk has a lot of uses, especially in baking. While you can drink buttermilk on its own, it is better to use it to bake tasty biscuits or tenderize meat, for instance.

For example, buttermilk can be used to bake soda bread. The acids in the buttermilk react with sodium bicarbonate, a raising agent. to produce carbon dioxade, a leavening agent. As mentioned earlier, buttermilk can also be used to tenderize meat. One can marinate pork or chicken in buttermilk, which makes the meat tender, juicy and full of flavour.

Cultured buttermilk, on the other hand, is the type of buttermilk that has been pasteurized, homogenized and inoculated with either lactococcus lactis or lactobacillus bulgaricus. Leuconostoc citrovorum can also be added. All of these are gram-positive, good bacteria that are extensivelly used in the production of dairy products. Commercialised cultured buttermilk was first introduced to the world in the 1920s.

On a final note, when it comes to buttermilk's nutrition, it contains vitamins, potassium, calcium and traces of phosphorus, which makes it quite healthy! Buttermilk vs. milk: Are there any differences? Can you drink buttermilk?

I have already answered the second part of the question - yes, you can drink buttermilk straight from the glass if you so wish, as it is very healthy. However, many people will find that buttermilk is not up to their taste. That is why buttermilk is best used to bake delicious biscuits.

Many people also get confused when they hear the name "buttermilk" as the name implies that it has something to with milk. But is that really so? Well, yes actually! Quite a lot actually, because buttermilk is actually made from milk. "But wait, I thought you said buttermilk was made from churning butter or milk" and you are right, I did say that. Allow me to explain.

How is butter made? How is cream made? What is the main substance from which all of these dairy products are derived? From milk, of course, hence why they are called "dairy" and not something else. You see, milk, when freshly drawn, contain fat globules. These fat globules can form on top of the milk, if the milk is let to stand. The layer that then formes is known as cream.

Cream, as you probably already know, can be removed from milk. Cream is used for various purposes. You can use it in baking, cooking and it combines well with different types of biscuits, you get the idea. However, another great use for cream is creating butter.

The most traditional way to create butter is to churn it. By vigorously stirring cream, one can cause the fat globules inside the cream to stick to each other. These fat globules, once they are stuck to each other, form butter. And as I have already said, buttermilk is the residual liquid that remains after one has prepared butter from cream.

So, what then, is the difference between milk and buttermilk? Buttermilk is, once again, the residual liquid that forms after preparing butter out of cream, while milk is the "base" substance without which it would be impossible to create buttermilk. While each has its own uses in baking, they are used to achieve different effects. Although the names are very similar and buttermilk does in fact come from milk, they are not that similar in the end! Just be careful if you try to drink raw buttermilk. You might not like the taste!

Buttermilk for biscuits: What it does and tips on how to use it

I guess we could discuss the intricacies of buttermilk all day, but I know what you are actually here for! And besides, I have pretty much summed-up all of the important information concerning the titular buttermilk. What about its use in baking? How can buttermilk be used to both bake and enhance your biscuits?

Due to the buttermilk's acidity and fat and liquid contents, one of the main reasons why you would want to use it is if you want to bake soft, fluffy biscuits. Buttermilk is most often used in conjuction with leaveners such as baking soda or baking powder, which causes the biscuit dough to rise. Another great reason for using buttermilk is because it ads a lovely tanginess to your biscuits.

If you are looking to decrease your consumption of fats, then buttermilk is also perfect for you. Although buttermilk does contain fat, it contains very low levels of it, which is still enough for recipes that require fats such as butter or cream.

To put it in other words, biscuits that are made with buttermilk have a tall rise and a very hearty flavour. They also tend to be very flaky or fluffy. However, if for some reason you do not wish to use buttermilk, acceptable substitutes for it are yoghurt and kefir. A quick note if you are going to use yoghurt instead of buttermilk: thin it down with water a little bit before doing so.

How does buttermilk compare to some other types of dairy fat though? Let's compare it cream, for instance. Cream is much easier to use than buttermilk. All it takes to bake biscuits with cream is some self-rising flour and you are good to go. No butter what-so-ever is needed when using cream. The biscuits made with cream tend to be very tender and brittle. While quite tasty, if you would rather eat some flaky or fluffy biscuits, your best bet is to go with buttermilk.

Since we are talking about butter, there was no way I could write this article without mentioning Paula Deen and her classic buttermilk biscuits! If you don't know who Paula Deen is, she is an American TV personality and cooking show host who has published fifteen cookbooks based around southern cooking. She is quite famous for her recipes, so it is a delight to showcase her classic buttermilk biscuits recipe.

For this recipe, you will need the following ingredients:

These are the steps you will need to follow in order to bake your own batch of buttermilk biscuits:

Fantastic combinations to pair your buttermilk biscuits with

There are many ways in which you can enjoy your freshly baked buttermilk biscuits. Don't limit yourself to sweet ingredients if you are a type of person that likes savoury flavours. There are so many tasty ingredients that you can put between your milk biscuits or use as a side dish. For example, you could use cheesy spreads to put on top of the biscuits or you could even dip them into cheese. You can put fried chicken in-between and combine it with a whole host of gravies and sauces.

For those of you who are more acustomed to sweet flavours, the sky is your limit! You could melt some chocolate and dip your biscuits in it. Alternatively, there are so many chocolate, hazelnut and cocoa spreads like Nutella that you could put on top. You could also combine these biscuits with a whole range of fruits, especially berries and so on. Although buttermilk biscuits are great on their own, it is their versatility that makes them so great.

Buttermilk biscuits are an amazing snack for every occasion, all thanks to their main ingredient - buttermilk. It truly brings so much to table, from making biscuits fluffy and tasty to having so many good vitamins and other useful nutrients. I hope you've found the article informative and that you have learned something new. If you would like to read more articles like this in the future, be sure to subscribe to our newsletter service, so as to not miss out on any future articles. Cheers! 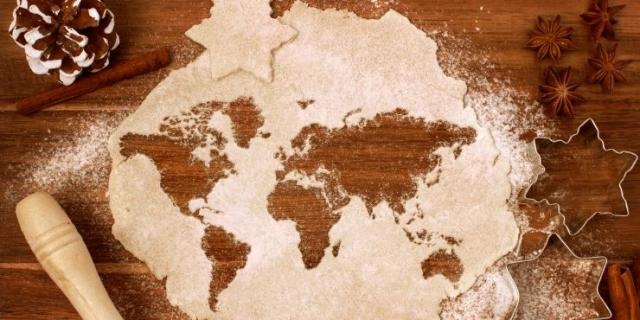 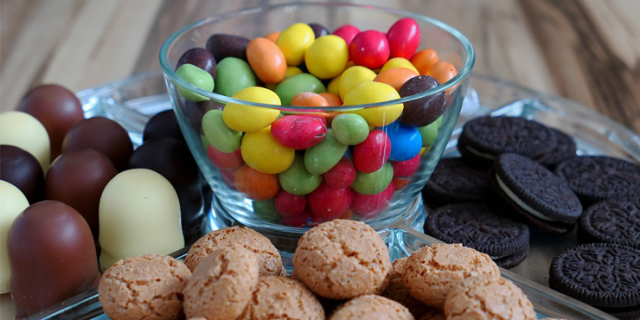 The Right Bite: The Hottest Biscuits Trends in 2021!
in
Biscuit Blog
In your hectic lifestyle, find the right bite! Discover how industries achieve success through marketing and adaptation to changing trends. 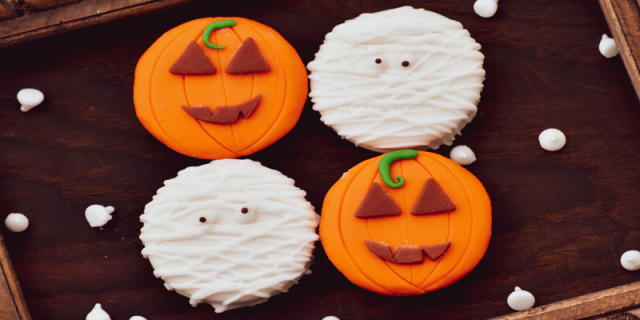 Top Trends in Baking for Halloween: Scary Good!
in
Biscuit Blog
Halloween trends for this year are spooky good: including biscuit brands that offer BOO Oreos, Reese's Pumpkin special stories and more – sit back, ti...
Looks like you don’t have a subscription to do that. Want to upgrade?
Upgrade subscription